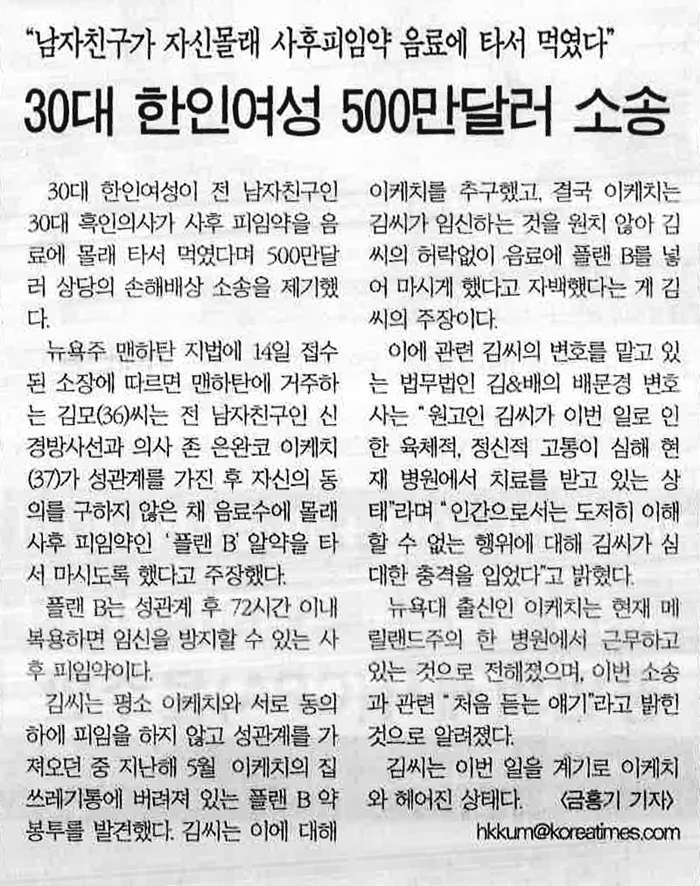 Korean woman in her 30s filed a 5-million-dollar damage lawsuit against her ex-boyfriend, Doctor in 30s, for giving her a drink that he secretly drugged with a morning-after pill.

According to the complaint filed in the Supreme Court of New York, New York County on April 14th, Kim (36) has asserted that John Nwankwo Ikechi –  her ex-boyfriend currently working as a neuroradiology doctor –  made her take a drink that contained a morning-after pill better known as “Plan B” without her consent after their intercourse.

Plan B is a contraception pill that aborts birth if taken within 72 hours.

Kim and Ikechi had been having intercourse without taking any contraception method by mutual consent, and it was last year in May when Kim found an empty Plan B case in Ikechi’s trash can at his house. Kim questioned Ikechi and he confessed that he put it in Kim’s drink secretly to prevent unwanted pregnancy.

Christine Bae, Esq., at Kim & Bae, P. C., her counsel, stated “the Plaintiff was damaged physically and psychologically after this incident and is currently receiving hospital treatment.” And that “she bears trauma from his inhumane action.”

Currently they are broken-up after this incident.