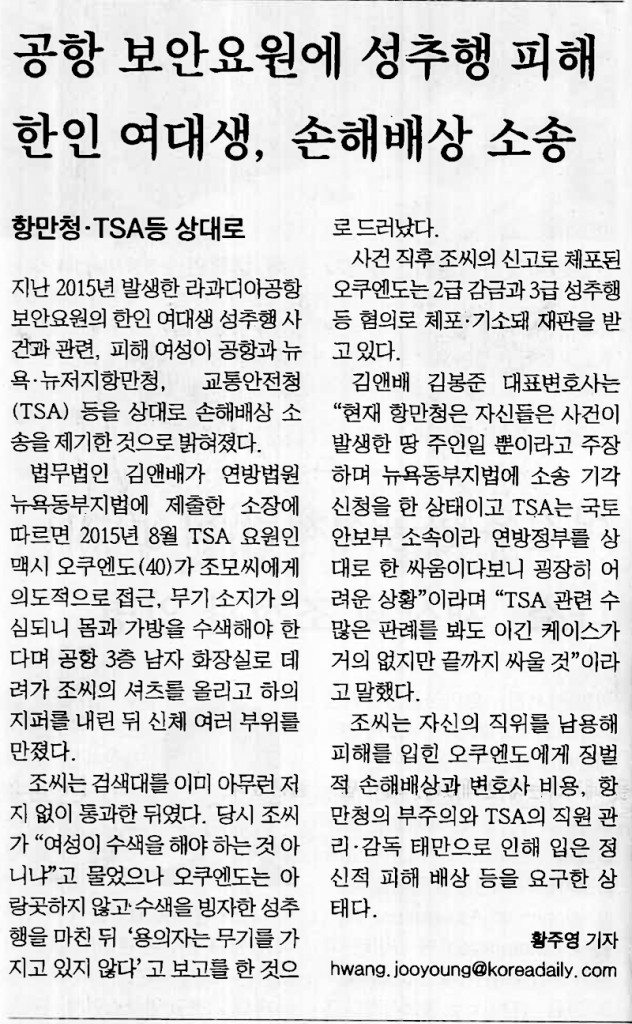 Against Port Authority and TSA

As per the complaint filed by her counsel, Kim & Bae, P.C., in the United States District Court for the Eastern District of New York in August of 2015, the defendant, Maxie Oquendo (40), the TSA security officer, intentionally approached the victim, asserting that she is suspected of weapons possession and then dragged her to the men’s room on 3rd floor and searched her body after illegally lifting her shirt and unzipping her pants.

The illegal search happened after she had already passed the security checkpoint. The victim questioned Oquendo and stated that this should be done by a female security officier, however, Oquendo proceeded to harass her and reported that she does not possess any weapon afterward. He was later arrested and prosecuted for second class detention and third class sexual harassment and is waiting for trial.

BJ Kim, Partner at Kim & Bae, P.C., stated “this is a very hard case as the Port Authority has filed for a dismissal, arguing that they are only a landlord of the place this incident occurred, and TSA belongs to the Department of Homeland Security, meaning the defendant is actually the Federal Government. There is only little possibility to win against the TSA as far as the precedent shows, however, we are not going to give in.”

Currently, Cho demanded for punitive damages and attorney expenses against Oquendo for abusing his position and compensation for mental damage against the Port Authority and TSA for their neglect of management and supervision of their personnel.