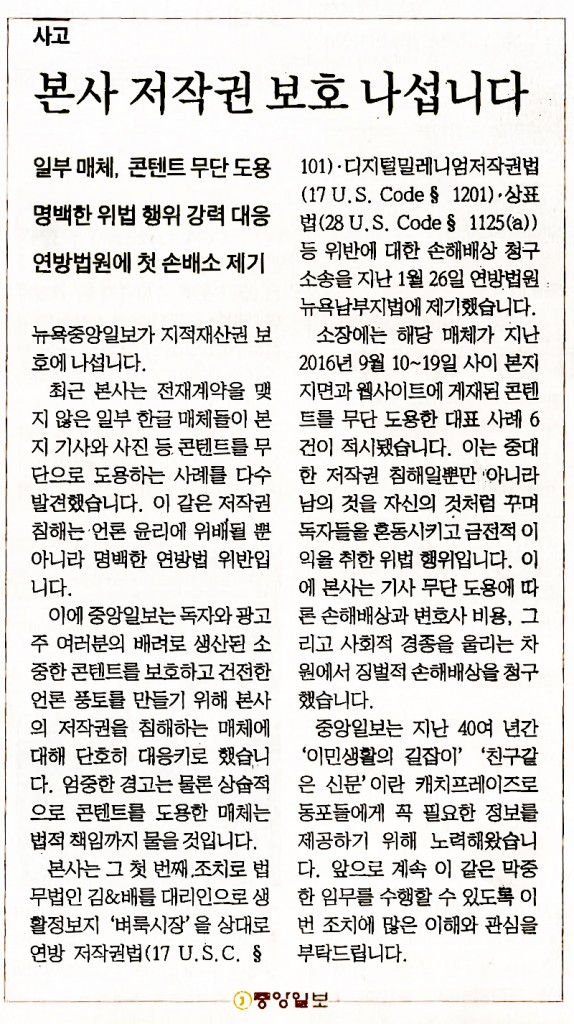 Korea Daily caught unauthorized use of its content by random media

Recently, this office has discovered numerous piracies of its content, including articles and pictures, by several Korean media companies. This kind of copyright infringement is against the common press ethics and, also, clearly violates Federal Law.

Therefore, Korea Daily has decided to take strong action against pirating media to protect its valuable content produced with support from its readers and advertisers and also to cultivate a healthy custom throughout the Korean American media community. Korea Daily’s actions in this regard are meant to signal strict warnings across the Korea American media community and demand liability to the fullest extent allowed by law against those who constantly misuse Korea Daily’s content without consent or permission.

According to the complaint, the defendant has used Korea Daily’s contents, published on its paper and webpage in between September 10th and 19th of 2016, without any form of contract or permission. This is clearly a serious violation of the copyright law and, also, carried out with the bad intention of achieving profits by manipulating the content to look like they have produced the content in order to mislead readers. Thus, this office has demanded compensation for the damage caused by their copyright infringement, attorney expenses as well as, punitive damages to increase social awareness of this matter.

Korea Daily has strove to fulfill its duty to provide the most needed information to Korean Community as a “Guide to Immigration” and a “Friendly Newspaper” for past 40 years, and it will always be its top priority to keep its promise. Thank you for your support and attention to this matter.